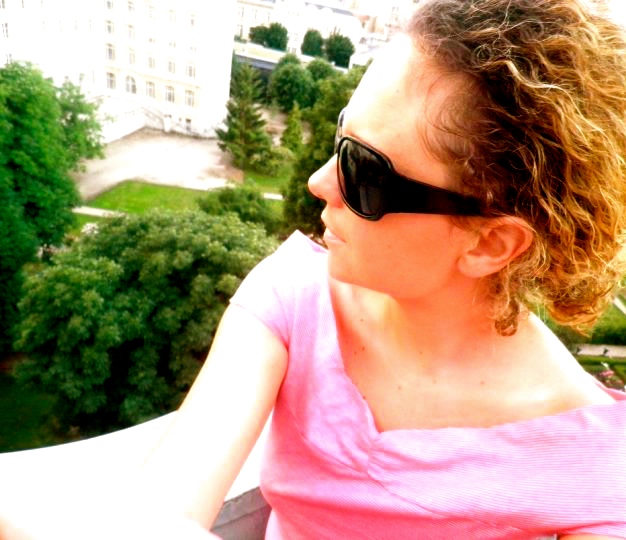 Writing my most recent blog about personal growth reminded me of my transformational move to Paris and remembered a letter  I wrote to friends and family 8 years ago describing my experience and thanking them for their unwavering support. I thought it would be fun to share… 😉

My first day in Paris…

It has been a dream living here so far, really…I don’t feel like any of this is really happening.  My first day here was EVERYTHING.  I have never experienced every possible emotion and sensation…simultaneously.

I arrived at Charles de Gaulle, on time…without any problems…walked right by customs (which seemed strange to me), but I didn’t question it.  I suppose that when you are following the right path in life, the universe works with, rather than against you.

There was a driver waiting for me. He was holding a sign that said “Kevin Zeller.”  I didn’t correct the spelling, I was too tired, and really, that might not have given him the best first impression.

As soon as we had left the airport, in true Kevyn fashion, I realized that I had left one of my bags at baggage claim, (in my defense, this is all after two weeks of travel and VERY little sleep).  I recieved a much deserved “oooh-la-la,” and we turned around and got my bag, again by-passing customs.

My driver was from Turkey. He had lived in Paris for 25 years.  He lived outside of Paris and gave me a map, showed me the area that he lived in and good places to “hike,” and go trail running.

He began telling my about where I would be living.  This is where the dream really began.  As we were nearing La Seine, and then getting into the left bank of Paris, we got closer and closer to Les Jardins de Luxembourg.

I was familiar with the area because the last time, (ten years ago), I lived in Paris, I was in love with this area.  I was living in Saint Germain-en-Laye studying at the Lycée International de St. Germain-En-Laye with a group from the Tecnológico de Monterrey.  I would go to the Luxembourg Gardens every chance I had.  This was sort of my sanctuary.  So, we got closer, and closer, and closer, and closer…. And I soon realized that I would be living just across the street from my sanctuary…. I started crying tears of joy!  I don’t think he could tell, because I had sunglasses on.

As soon as we got to my new home, he unloaded my bags and was gone.  Literally, it felt like he vanished into thin air.  I am sure that this had to do with my lack of sleep, and the fact that I was overwhelmed entirely with everything that was finally becoming a reality.  I had just moved to a foreign country…alone.

I had the code to get through the first door, and then I was supposed to find Cindy’s (my landlord/bosse’s) name and call her in her apartment and she would come down and take me up to my apartment.  So, I found her name.  The response I received was someone saying, in French, “4th floor.”  Nothing more, just that…”4th floor.”  So, the adventure began.

I went up, on the most ancient elevator I had ever seen…  It actually stopped between two floors, and the doors opened.  Ummm, ya….yikes!!!  The funny thing is, if this would have happened in Denver, I would have freaked out… because elevators work in Denver! Or at least I know that they are supposed to. When this happened, I just thought, “well, I guess that happens…..here.

Cindy’s place took up the entire 4th floor… absolutely beautiful!  She, greeted me at the door, abruptly making me aware that Washington Mutual had just gone out of business.  I was shocked to hear the news, but again, not really in a state to take in more than I was already trying to let absorb.

She then, took me up to my flat.  Helped me move my things in… and then, just as my driver had done, vanished.  In retrospect, I am sure that she was there for at least 25 minutes, but again I was in a state of trying to really understand what was happening, on very little sleep.

So, there I was.  In my flat in Paris. I honestly didn’t know if I wanted to jump up and down for joy…. or cry.  It was one of the strangest feelings.  I have never been so happy AND so sad at the same time. Really, there I was alone in my own flat… in Paris…but alone, really alone.  I let, for a moment or two, the sadness take over… and then….I looked up.  I looked out the window, at the view….PARIS, there are no words.

There is so much meaning to “la vie en rose,” “the city of lights.”  You can be looking at an object, any object… and with the light that this city provides you can see whatever you want to see in that object… That is how I felt.  I am alone…. or (under the light of Paris)…I AM ALONE! I have my life in Paris in front of me, literally…the view from my window said it all.

I decided to start unpacking.  I wanted to plug in my computer to e-mail the pilates studio and see what time I had to work.  My sister had also made a cd for me with all of the songs that remind me of my family, my heart and soul.  I thought this would help ground me.  The battery was dead, and the voltage converter that they had sold me when I bought my computer, I found out, didn’t work.  The box said that it would work for hair dryers and irons… but not computers or cell phones.  So, computer-less, cell phone-less, clock-less…

But I don’t know if I have ever felt so ALIVE.

Talk about being in the moment.  When you are forced to be without any of these everyday distractions, and are consequently allowed to just be. Just be by yourself, just be alone… beautiful freedom….

So, I took a long, hot shower. I made a cup of tea, I opened the windows, and sat on the big chair by the window… and slept.  I awoke after what felt like an eternity and looked out the window.  The sun was just about to set.

I decided to go for a walk, I wanted to go to the Luxembourg Gardens.  I knew that place, it would be comforting, I could sit there and think for a while.  As soon as I got to the gates an officer told me that the gardens were closed because a movie was being filmed.  So I kept walking, and found a little market.

The market was called Ed.  It made me think of my sister, because she names EVERYTHING.  I thought to myself, “if my sister had a market, she would name it Ed,” so I went in.  I bought a few essentials, and quickly learned my first lesson.  At Ed there are is no one who asks you if you would like paper or plastic.  As a matter of fact, there are no bags at all.  So, after having paid I kind of awkwardly carried my things out.

On my way home, I got lost, (those of you that know me well are in no way surprised by this I’m sure).  The beautiful thing is that getting lost in Paris, is fantastic! There is no reason to get upset or worried… there is so much beauty and life around you that it (getting lost) is almost something you look forward to… a welcomed adventure.

And… you always find your way home.

Once I got home, I called Cindy and borrowed a clock from her.  Someone called me from the studio and told me what time I would be teaching the next day, I set my alarm and fell asleep.

The next morning I woke up and made some tea (I had forgotten to by coffee at Ed).  I got ready, practiced my French, (the essentials; spine, inhale, exhale, curl, lengthen, stretch, feel….).

But I enjoyed the experience none the less.

I was  greated by HUGE smiles and hugs.  The group of people working at Core Body are truly good, wonderful people.  They instantly made me feel at home and welcome….And relieved, when Julie (who is absolutely one of my new favorite people EVER) at the front desk told me that my first client was running late.

My first client showed up at about 10:30, so I had a chance to get a tour of the studio.  She spoke only English.  Thank Goodness!

My next client was from NY, very lovely person.  She asked me about how I was adjusting to Paris… I told her that everything was really new, my senses were a bit overwhelmed with the task of absorbing all of the new… and she responded by asking, and I quote “oh, well do you know where I might find a Halloween store here?”

Uhhmmmm………. Well, right now I don’t know where my favorite pair of shoes are, but a Halloween store…YES!…NO!!!!!!

I think that it was her way of relating to me as an American in Paris… we both celebrate Halloween, that is important.

This sense of coming from the same country, and therefore being friends, connected by holidays such as Halloween, that aren’t really celebrated in Paris,  regardless of whether you “know,” eachother or not, is one of the main reasons I love living in other countries.

We let go of the stuff that really does NOT matter, and just allow ourselves to be human beings from the same country for a while.

I have often wondered what it would be like to travel to another planet, and if we, then, would see someone from Earth and feel the same way.

How refreshing would that be….

It has been about a month, and a week.  I know that there will be many more stories to tell, but I wanted to share the experience of my first few days specifically with you.

This, for a few reasons, but mainly because I wanted to thank you.  Honestly, I was a afraid when I arrived, it was scary.  I am human enough to admit that.  I was so far outside of my comfort zone, outside of what I know, far from my loved ones, and I was tested.

Knowing that I have strong, wonderful, beautifully spirited friends and family that are ALWAYS there to support me, no matter where I am, made this experience possible for me.

And for that, I am very grateful.

I LOVE YOU ALL!